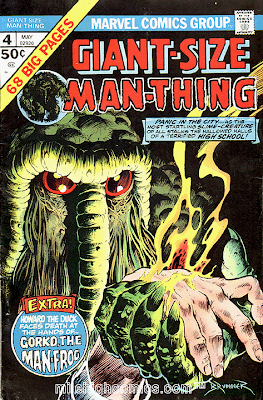 With my epic X-Men/ Tranz finished, let me borrow an idea straight out of my own
reading-for-fun while recuperating lately.

Some of you will think I've finally gone round the bend from the title. I'll explain:

I've been enjoying Steve Gerber's Man-Thing. This admission is not as shocking as it may sound. While we kick out the last of this cold, I helped myself to a black and white volume of these 1970's comics written with adults in mind. Chemist Ted Sallis worked on a serum designed to give the American military a new Super Soldier Serum. Let's blame it on Valentine's Day, but he takes his hot girlfriend Ellen with him to the Okefenokee Swamp. She wants to lively things up considerable and is dressed to do the trick. She's a very clever companion for Ted, whose tastes, we later learn, has run to at least one hippie girl ("A Candle for Silver ST. Cloud!" Man-Thing #15, 1974). He's only a man, after all, and the negligee is a cunning way to break the humidity.

But Latin's greatest poet on matters of amours, Ovid, once said: "Cunning leads to knavery. It is but a step from one to the other, and that very slippery. Only lying makes the difference; add that to cunning, and it is knavery."

Unfortunately, she ambushes him with mercenaries afterwards, he runs, he injects himself with the one sample of the serum, and one car crash later, his body is decomposing---and re-composing---in the swamp.

Now, as feeling guys go, Man-Thing is pretty much all heart. It's fair to say, love left him mindless---but he's hardly the first of either gender to have that result. As Ovid wrote: "Ah, me! Love can not be cured by herbs." In Manny's case, he's now devoid of intellect, entirely motivated by the feelings of those in his proximity. With looks like these, he unintentionally scares folks, which is far more unfortunate, because, thanks to an acid secretion on his mossy surfaces triggered by fear, "Whatever knows fear BURNS at the Man-Thing's touch!"

The way to deal with Man-Thing was also addressed by Ovid:
"Courage conquers all things: it even gives strength to the body."

Now, the stories I enjoyed this weekend involved book-burning, bullying, manhood, and other serious topics. As the Man-Thing is neutral without his empathic reactions, it is always the regular human beings in the stories who carry the drama (and a few non-regular ones, too), in language that veers between the absurd (because life is absurd) and very naturalistic. Furthermore, while his legend grows by word-of-mouth, people are hardly clued-in initially to how to take this gigantic heap of veggies with the glowing red eyes, appearing without explanation. Ovid: "The cause is hidden; the effect is visible to all." 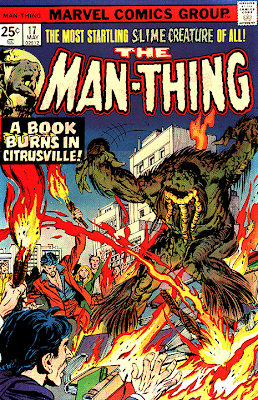 As for the loneliness which makes Valentine's Day so pointless and embittering to some, make no mistake, the holiday's more totally screwed for Man-Thing. Good thing it makes no difference to him; I'd pass the same advice to you, too. In one of his rare adventures with colorful costumed super-people (this one, three years after his series is cancelled), he takes on a demon called D'Spayre, who reduces Spider-Man first to a quivering mass of Fail and even induces Man-Thing to burn himself with the fear he affects deep within, at the level at which he is still Ted Sallis. But Spidey's encouraged not to go out like that, and though he parks at the cliff's edge of madness, from the look out he sees a way to fight back. "The Bold adventurer," Ovid wrote, "succeeds the best."
http://i243.photobucket.com/albums/ff252/gcoxgcox/GiantSizedman4.jpg
Love is not easy in these stories; when disc jockey Richard Rory gets mixed up protecting Ruth Hart from her motorcycle gang ex-friends and boyfriend, he needs her help as much as she needs his. In fact, patching Richard up is one of those steps in finding her way to a nursing career (seen later in Omega the Unknown). His new friend the Man-Thing is already mixed up with a developer named F.A. Schist (clever name, Gerber), and fortunately, their problems take care of each other---as you can find in Man-Thing #3. The mounting weirdness that is life in the occult-ridden swamp (trust me, it's a hidden Nexus of All Realities) makes Ruth decide to make her own way rather than keep hanging with Richard---I mean, in Gerber's comics, it's always possible for a person to have the sense to realize when too much bizarreness is too much(Man-Thing #8, I think). "There is no such thing as pure pleasure; some anxiety always goes with it." ----Ovid

Of course, Richard begs her to reconsider---and one day, they'll be together again, which they can't know now---for
"Where belief is painful we are slow to believe." And was it she who went on to write the book: It's a Man Thing: A Woman's Guide to Understanding Men?

HERE's an adaptation of one of Ruth and Richard's adventures with Man-Thing.

I've saved the last three stories for myself to enjoy later; as horror, scene-for-scene, I'd put them up there with Stephen King, Clive Barker and Anne Rice. Perhaps they were scaled back just a little for the Comics Code, but what little they lack in sex and gore is made up for by clever writing and meaningful themes.

Finally, Marvel Comics produced "Giant-Sized" comics, about twice the size of their regular ones, a quarterly offering for fifty cents, and all their popular titles were treated to this format, in addition to their regular monthly issues. So were we graced by five issues of...Giant-Size Man-Thing. And while the 7 foot plus character is already pretty giant-sized, his name gives way to a pun you may never really be able to look past.
"Why should I go into details, we have nothing that is not perishable except what our hearts and our intellects endows us with."--Ovid

Well it's kind of hard to beat Heather Locklear in the " The Return of Swamp Thing ". I should also mention here that the last time I saw Heather Locklear she was wearing a cheer leading outfit ..... oh! wait a second that was a dream I had. The Man Thing is OK I guess. But you cannot beat The Swamp Thing because there were 2 movies and a two season TV show. Also Ryan has a cousin named Ovini any relation to Ovid?

I might change it...but the Ovid line's too good to pass up, isn't it?

A nifty job connecting this to Valentine's Day! "Love and the Man-Thing", I really should've thought of that myself, it's terrific. Is it wrong of me to wish it was a few more thousand words, Ovid's remark about details notwithstanding?

Pretty swift stuff! Where does Ruth ("Hart", of course) come from, where does she go, what's the meaning of her arc through Gerberspace? We're right at the margins here, one foot on her unique geodesic and the other in all realities at once. Time and space enter into all things, to misquote Ecclesiastes...but then there's that "love" stuff, to the Greeks the cosmological parent of both.

Maybe we should spend some time just looking at the people who flee weirdness they can't handle, in Gerber's oeuvre...there are certainly plenty of departures! Just as Trish Starr, people who just look like they're going hyperbolic, escaping the attractors, leaving all states of the system for good...and we don't know that they're not, but in the end they just make the story bigger. Or, the story gets bigger, and catches up to them? Maybe all the title- and supporting-character stuff is just scenery, in the story of the bit players...

...Or to put it another way: you've got me thinking.

It's always refreshing to read when someone has insightful thoughts on Gerber's already deeply insightful pictoral essays of the human condition.

I tend to wax on a bit as well about Man-Thing (among other thing) on my comics blog, but oddly enough my entry for Valentine's Day 2011 was entitled:

The pun just screams to be used, right?

It's a bit of a light passing look at the few times that Manny has got some affection in the comics pages.

You're the one who inspired me to kick off my essay :-0

Quality over quantity, Bigby! I think what's done with Gerber's work, in cinema, haunts the very dreams of Alan Moore each time they attempt an adaptation. (They probably don't have Heather Locklear in a cheerleader outfit, but you never know, whatever makes your snake god dance.) I didn't bite on either movie(Howard or Manny), however, as a true blue fan of the comics.

@Plok: I've never seen a title better designed to feature its bit players. I think there were human beings at the forefront of his mind---may have even been a Mad Viking somewhere in his life, they were all over the American South of my boyhood---and yes, perhaps the story just became large enough to reach them. A Man-Thing essay of this sort might help open a world of such writing, and yes, we seek and then flee the marginalia of the world's weirdness, like the lucid moment you bear down on the gas and pass the Citrusville City Limits sign. In a longer essay structured to that purpose, Carol Selby deserves more mention, particularly for her effect on Richard's life. Carol's a great example of how Steve knows just what details to give you for you to fill in a living, breathing person; I'm almost shocked at how sparing his choices really are, in the confines of a 19 page comic book.


I was working entirely from memory with Essentials Vol. 1---can't find mine---but Steve's work is richly evocative. Now, where Ovid, an undergrad fave of mine, slipped into the mix? From the place writers get ideas, I can say no more. Really! Can say...no more. I knew SSOS (let me see if I can put in a link here) was intended for his superhero work, but having the freedom to just write something and the single, well-stolen idea of the title, the theme generated the response; it was a simple as getting a barbarian out of a jar of peanut butter---that's correct!
"This weeping clown"---nice!